On Christmas Eve, I received the email below from Dorothy. 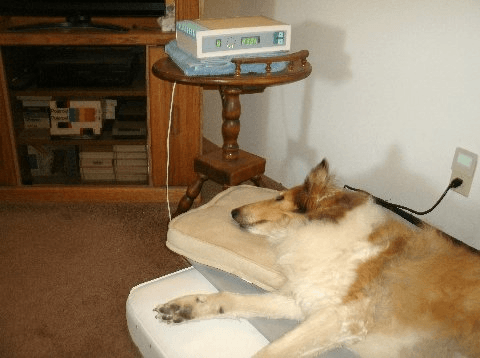 Amber Dawn enjoying a treatment on her very own Curatron 2000 HT.

I had promised to give you an update in a few weeks on Amber Dawn’s progress with her daily Curatron treatments but it seemed at first that she took two steps forward and one step back. The Curatron definitely helped reduce her pain and because of this her mobility appeared to improve. But I’m dealing with a dog and pain relief when there is a physical problem, I soon learned, required a lot more vigilance on my part to keep her safe. Amber was feeling better so she would move faster and do things that she shouldn’t. Then because her back legs were still weak, she would frequently slip or trip and fall and not be able to get up without help from me.

However now that we are a couple of months into the treatments a recent snow and ice storm has shown me that the Curatron is getting to the root of the problem. In the last two days Amber has slipped twice on the ice. The first time her left hind leg went out from under her while squatting to pee and she was able to bring the leg back under her and rise up. Yesterday Amber slipped on the ice while walking and her right rear leg went straight out from under her and she sat down but was able to get up again on her own. This was a monumental achievement for her.

Amber still loves her treatments and as soon as I start setting things up she comes over on her own, climbs on the pad, lies down and usually just falls asleep. She may not be able to talk and tell me how much pain relief she gets from the Curatron but her eagerness certainly conveys the message loud and clear.

Hope you and your family are enjoying the holidays. Amber and I certainly are.

P.S. I am also enjoying my new Curatron 2000XP. I would recommend that everyone who has an HT upgrade to an XP and donate the HT to a deserving dog that needs it.